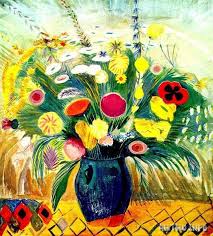 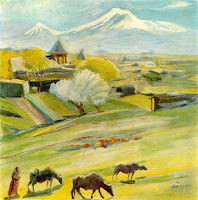 Martiros Saryan (1880 -1972) is one of the greatest painters of the 20th century, an outstanding colorist. 'Color is a genuine miracle', the painter exclaimed. 'In combination with sunlight, it expresses the spirit of object's shape and the essence of universal existence'. Saryan's paintings, created in bright, saturated colors represent a new aesthetic perception enable us to understand that art is not only an imitation of reality but, it is the use of free imagination and abstraction. At the same time, Saryan adheres simple natural shapes in his paintings, always believing nature to be his main mentor.
In the beginning of the 1910's, Saryan was a bold innovator, who brilliantly united artistic traditions of the East with the new achievements of the twentieth century European painting. The artist was recognized in Russia, where some of his paintings were bought by the famous Tretyakov Gallery in Moscow, others were exhibited in Europe. In 1921, Saryan settled in Armenia, to participate in its spiritual rebirth. The ideology of the Soviet country in which he resided created certain difficulties for his free creative evolution. But the artist remained loyal to the principles of his own style. The earlier elaborated technical methods and ways of expression were enriched with new content. As a founder of the modern Armenian school of painting, Saryan asserted in his art the timeless and humanistic values of high art.
In 1895 Saryan finished Armenian-Russian school in Novaya Nakhichevan. Already during his school years Saryan's progress in drawing was appreciated by special certificate. After finishing school Saryan worked in a post-office. In his spare time he copied illustrations from journals and sketched some of clients. Willing to encourage Martiros's passion for drawing his elder brother introduced him to his friend, artist A. Artsatbanyan, a student of the Moscow College of Painting, Sculpture and Architecture. Appreciating the inborn talent of the youth, Artsatbanyan trained Martiros for the entrance exams to the Moscow College. In 1897 Saryan became a college student.
The feeling of independence and freedom of creation in the Moscow School of Arts, Sculpture and Architecture, the unceasing search for new shapes, the breaking of the old and expired traditions of fine arts, the struggle against academism, the bold experiments of young artists who so keenly felt the pace of time, the first exhibitions of the latest achievements of European, especially French, painting - the subtle and susceptible spirit of the young artist absorbed all the above mentioned. His talent enriched, his vision sharpened, his technique improved. Training in the studios of the famous Russian impressionist K.Korovin and outstanding painter V.Serov facilitated the development of his professional skills.
But during his early period, Saryan's portraits and landscapes do not yet reveal the artist's individual style. One can easily notice the canons of classical painting: gray color spectrum, transforming from light to shade. However, these pieces of work are already the proof of the young artist's mastery.
Trips to the Caucasus in 1901-1903 were a true revelation for Saryan. In the summer of 1902, Saryan visited Ani, the old capital of Armenia. 'In the picturesque nooks of the south of our ancient country, I found again the magic world of my childhood', recalls the artist (“Martiros Saryan”, p.58).Influenced by the southern sun and optical color effects created by its rays, the palette and the imaginary system of Saryan's first individual works changed. 'The hardest time in my life was the time of initial seeking… I wasn't satisfied with beaten tracks… I decided to follow my own aspirations…', the artist recalled. 'All what I painted from 1904 was a combination of the real and the imaginary - the real insofar as I painted it being guided by my impressions of what I saw, and the fantasy insofar I was synthesizing it in my imagination' (“Martiros Saryan. From My Life”, p.78). Thus, in 1904-1907 Saryan created the watercolor series 'Fairy Tales and Dreams'. The simplified figures of people and animals depicted by the painter are easily recognized. However, the overall mood created by their interaction is so unusual that carries the viewer away to the world of feelings energizing his imagination with mysterious power. Subconsciously a viewer experiences a marvelous harmony of nature.

Some pieces of this series were displayed in 1907 at the Blue Rose exposition in Moscow that was the first exposition of Russian painters-symbolists.